My Cart
Shop by phone! 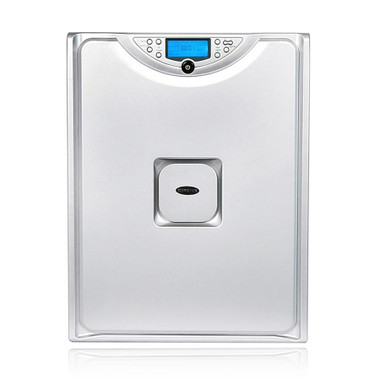 Sorry but this item is currently unavailable.

Please check back at a later stage.

According to a number of national organizations, including the American Lung Association, the Consumer Product Safety Commission, and the Environmental Protection Agency, studies have shown that air pollution in our indoor settings, including offices, may be more of a health concern than air pollution outside. Indoor pollutant levels may be up to five times higher than outdoor levels.

*This unit comes with one year limited warranty.

2nd Stage: Activated carbon filter - Also called the activated charcoal is a form of carbon that has been processed to make it extremely porous and thus to have a very large surface area available for adsorption of airborne chemicals, gases and odor. It eliminates and removes chemical fumes, toxic gases, smoke, pet and other odors.

3rd Stage: HEPA filter - High Efficiency Particulate Arresting (HEPA) filters are designed to remove 99.97% of all air pollutants that are as small as 0.3 micrometers such as pollen, allergens and dust mites. For reference, 1 micrometer is 1/100th the width of a human hair! HEPA filter has much higher filter efficiency than the ionic type air purifier and does not emit harmful ozone.

4th Stage: Photocatalyst - Photocatalytic oxidation (PCO) is not a filtering technology, as it does not trap or remove particles. It eliminates and kills 99% of organic contaminants such viruses, mold and bacteria by completely oxidize and degrade organic contaminants. Helps to potentially reduce the spread of influenza and other airborne illnesses.

This product hasn't received any reviews yet. Be the first to review this product!